Trust me when I say I know all about this! Here is my big, black, Maine Coon named Sebastien. He definitely owns me…sigh. As you know I have a special place in my heart for black cats! Here’s to their majesty and beauty! Let’s Celebrate!

As I’m sure all of you know, there is a special place in my heart for Maine Coon cats afterall, my Sebastieno is a Maine Coon Mix 🙂 Here’s a photo sent in by my friend Bijan Foroutan of his  majestic Maine Coon named Angel. Thanks Bijan!

June 8, 2016-The evening was a restless one; I kept replaying the events over and over in my mind and tried to think of what I could’ve done differently-but it was of no use. I had resigned myself to knowing that I was never, and could never be a “good cat.” It was not in my nature…that would be like saying I want to be a dog and then trying to act like a dog and trying to do everything a dog does but to no avail…utterly useless. Besides, why would anyone ever want to be a dog? Have you seen what they do to the stupid humans?

To be quite honest I am glad that I am who I am…I am ambitious, stealthy, ferocious, brilliant, majestic and I move with such grace that it astounds everyone around me on a regular basis…yes…I am the best…just the way I am. I had been foolish to think that I could be anyone else but me. The road to hell is paved with good intentions…or is it adverbs?

I sneaked up the staircase and watched as Grandpa cleaned up the mess I made; he was a good egg. It puzzled me to think that the large, stupid human was his kin, but alas it was so. I watched him pick up the food that was strewn across the kitchen floor and how Simba rubbed against his legs. I knew that Simba had no idea what was to happen to us tomorrow and I would not alert him…it would be for his own good. I went to the Google and typed in “Pet Hotel”…a few seconds later a number of pictures showed up on the screen and the sheer sight of such an institution made me gasp in horror! 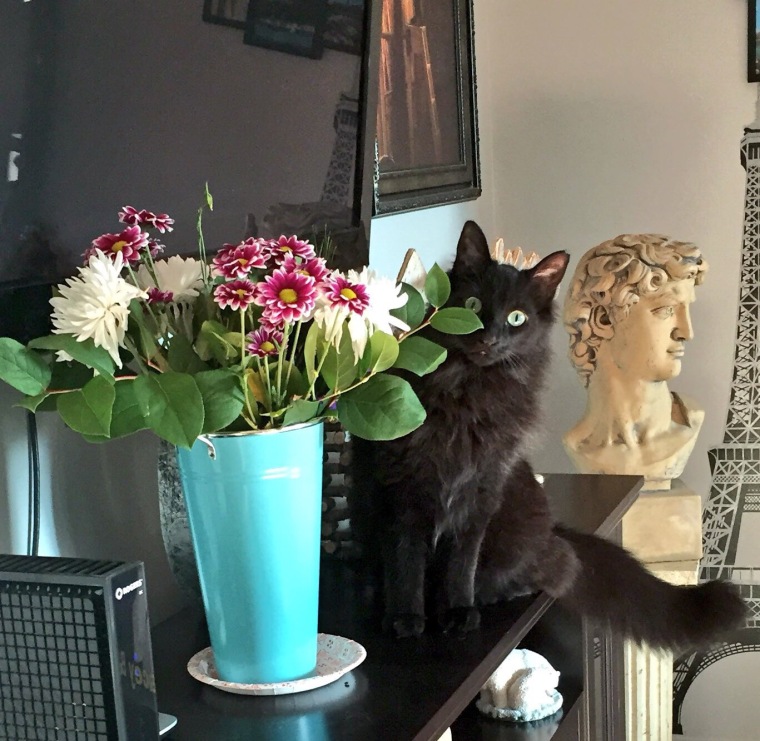 In celebration of Whiskers Wednesday…Have a purrfect day everyone!