August 29, 2017- You guys are going to love this story about a black and white kitty named Kyle who has the most unusual job in Scotland! Read more about him and his hilarious antics (such as enforcing a rigorous on-the-lead policy for canines!) as well as the lives he’s touched. Click on the link below 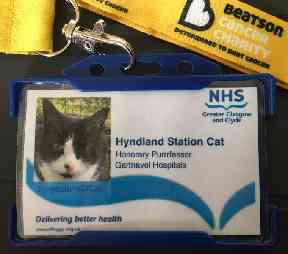 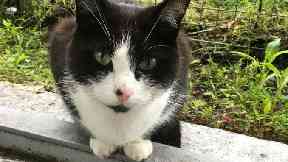 September 7, 2016-There I stood, nose to nose with a behemoth. I had never seen anything like this! It was some sort of canine yes, but not the kind I had ever come across and it definitely wasn’t Monty. I took a step backward, raised my hands in the air as if to surrender and slowly tried to move away. The huge animal shoved it’s nose into my belly and gave me the once over. He sniffed and snorted at me and I was covered in his slobber; it was absolutely disgusting! As soon as I figured out who this chap was I would send him my dry cleaning bill!

While he inspected me I looked behind him and saw an enormous bone…that’s what the sound must have been, his teeth scraping the scraps of meat off of it.  The gigantic canine finally stopped sniffing me and I relaxed a little. “Is this Monty’s house?” I asked as Simba came out of the bushes and joined me. He must have figured it was safe now that the animal hadn’t made a meal out of me. “Yup it’s his house but he’s not here…who are you?” the canine asked suspiciously. “I’m Seabass and this is Simba,” I said pointing to him. “We really needed Monty’s help, when will he be back?” I asked. We were running out of time to find the small human and there had been no indication that the large human had received our message.

“Why do you need his help? I can help, what do you need help with?” he asked eagerly. “Our mother is missing,” Simba said, “Our human,” I clarified. “She has been kidnapped by a horrible man and we are afraid that we’ll never see her again-that’s why we needed Monty! We were going to have him track down her scent and lead us to her…before it’s too late,” I said. The canine paused for a moment then said, “I come from a long line of canines that help humans, my grandfather was a Saint Bernard Rescue Dog, he saved many lives in the Swiss Alps…I can help you find your human.”

April 22, 2016 – The small, stupid human was standing on the front stoop with her hands on her hips; she looked worried.  I remained perched on the branch just a few feet above her sight line and the large, stupid human did not see me either. The wind was blowing quite fiercely so I decided to retreat to a few branches below; this was a mistake because the hell hound caught my scent and started barking. He sniffed around the base of the tree and looked up…I had been discovered!

I quickly but carefully scaled the tree to the highest branch. The idiot canine danced around the bottom of the trunk and continued to bark; he pointed his nose in the air and alerted the humans to my location. The small, stupid one called my name and tried to coax me down from the branches but I would have none of it; I would not go back to captivity without a fight!
The view was magnificent from where I sat, I could see everything! The humans were frantic and I could hear the large, stupid one speak into some sort of device; he was relaying the fact that I was in the tree top and that he could not reach me. I was quite comfortable and would not mind bunking here for the night but my plans to do so were in vain. I sat and admired the night sky for awhile when I noticed a large, red truck with a hose and a staircase had turned onto the street; it stopped right in front of the prison and a man got out. He spoke with the prison warden and she pointed in my direction. He started to manoeuvre some sort of staircase and before I knew it he was almost eye level with me.

There was nowhere for me to go but down and once I realized how high up I was I started to get dizzy. I clutched the tree and the man in the uniform gently pulled me from the branch; the small, stupid human was crying again and the man handed me over to her. TRAITOR!  I heard the large, stupid human mutter something like, “I could’ve done the same thing but I don’t have a ladder that’s tall enough…” I writhed with anger in the small, stupid one’s grasp and scratched at her face, the pain was too much for her to bear and she let go of me. I raced away from her clutches and returned to my backpack to gather my things when I spotted my arch nemesis…STEPHANIE.

April 20, 2016- I crept out from my hiding spot and trotted down the hallway, I had to see this! The small, stupid human was wrestling what was left of the roasted chicken away from the hell hound. Simbicile was sitting in the corner grooming himself as if he had no idea how the chicken got into the jaws of the canine beast, but he had failed to clean a large hunk of meat from his own face!…Idiot!

The small, stupid human picked up the carcass and threw it in the trash…I suppose they would have to feast on a dry kibble called Capn Crunch again; I knew this because this is what the large, stupid human usually ate for dinner when the small, stupid one was working late. Monty trudged over to the small, stupid human and tried to make amends by covering her in his slobber. How disgusting and most ungentlemanly; I would never dream of doing such a thing to a human…you never know what germs and viruses they contain.

At this point the large, stupid human finally arrived and restrained the hell hound. He ensured that none of the carcass was consumed and that Monty had not swallowed any bones. He had not and would live to see another day much to my bewilderment and disappointment. The small, stupid human scooped up Simbicile and scolded him for his implication in the crime; he looked at me with displeasure and it warmed my frigid soul. A most excellent day so far!

I know that canines are vapid, vacuous creatures that can do little on their own without the assistance of humans but I had no idea to what extent. Apparently canines need to be let outside, to use their litter box…in public…where everyone can see them. But it gets worse, the stupid humans must gather the canines excrement in small baggies! I am unsure of what happens next, perhaps this is what is used to grow more canines…perhaps a fertilizer of some sort?

I formulated a plan and decided that when the mighty beast went for his evening ritual that I would escape undetected…now all I had to do was wait. Freedom would once again be in my grasp.

I ran as fast as I could but could hear that footsteps were close behind me. I bolted to the doorway where we had originally entered but it was closed. There was no escape so I did what any fugitive would do and looked for a hiding place.

I perched high above the floor and held my breath. The small, stupid human, the leader of the aliens and the alien’s assistant came rushing down the hallway; they entered the reception area and looked around, the lead alien called my name but I didn’t move.  They divided their forces and split up to look for me, it wouldn’t be long before they found me because the place wasn’t very big. The small, stupid one came into the storage room where I was concealed between bags of feed. She called my name sweetly and finally her eyes fell on me. There was no escape. The small, stupid human reached for me with a towel and alerted the others of my capture. I sprang at her, used her shoulder as a springboard for my exit and she screamed out in surprise; the chase wasn’t over yet! Like a gazelle I leapt over a barrier of boxes and found myself in another room. This room was full of holding cells for animals. There were hostages of all kinds; canines, a few of my brethren and an unidentified weasel of some kind, I have heard this thing called a ferret which probably means, “Stretched out rat.”

I jumped onto the top of a cell that held one of my kinsmen and plugged myself into a small space between the cell and the wall; there was no way that I would ever be captured here. “Are you ok Sir?” the kinsman asked me. “Of course I am, I’ve not been apprehended have I?” I said between laboured breaths, “What are you in for?” I asked. He looked at me and shuddered, “Some sort of procedure called, “Neutering,” I think it means that they are going to take some of my brain!” He burst into tears so I reached through the metal bars and shook him, “Be strong man! Do not give up hope-freedom is close!”  I was embarrassed for him, yes a lobotomy or this neutering procedure as he called it, would be uncomfortable and he could not afford to lose any of his brain, he obviously needed it.

A canine would not stop alerting the small, stupid human and the aliens. The trio entered the room where I was hiding and flipped on the overhead lights, the brightness burned my retinas. I watched carefully as they released the canine from the cell and held onto it’s necklace. The canine started sniffing and walking in circles, it seemed to be picking up a scent. It was getting closer with every step and I feared that I would be found. It stopped in front of the cell that was holding my comrade and sniffed around a bit more. The canine shoved it’s face into the space I was occupying and his gaze locked with mine.