August 2, 2016-This story is from one of my friends on LinkedIn, I know that you’ll enjoy it as much as I do! A special THANKS to Bijan Foroutan and his kitties:) I just want to say that there are so many amazing people in the world who truly care for animals and cats alike and Bijan is an absolute angel.  Here’s his story in his own words…

I own a house in Encino, CA where I found both of my adopted rescues in my back yard.In circa 2002 there lived a cat mom and her kittens where close by my backyard. The kittens looked adorable…. We had names for each of them. Two black Maine Coon and one grey tabby. The kindest of the kittens was called Angel. These cats lived outside and used to come to our house at feeding times. We fed the whole family on a regular basis. We also trapped them all and had them spayed, neutered and released. One of the kittens called Angel, a black Maine Coon felt out of place outside and used to come to our roof top at night and cry the night away. We were very concerned but did not know what to do, except feed her as much as we could. She would at times disappear for a few days and had gone down in weight significantly. We had coyotes in the neighbourhood that used to eat little kittens.

In parallel to this we had a small grey tabby that came from a second litter the first cat mom had in 2004. We called her platinum and fed her on time, every time. One day she tragically disappeared………Coincidentally all the sudden I started hearing a little kitten come by my house several times a day and just cry and cry. The kitten may have been 8 inches long at the most and we knew that the coyotes would get her very soon….Within a few day in August 2004, I trapped the little kitten and brought him into the house. He was very feisty and hissed and hissed at us. He did not want anyone touching him. We carried him around in a towel. We took him to the vet and had him vaccinated and checked out. He had been eating leaves and lived in bushes and was under a lot of stress. He has been with us ever since.

The black Maine Coon described in the early part of my story was still living outside and was getting skinnier and skinnier and looked very frail and lost. She had noticed that the grey tabby “Tiger” was living a safe and comfortable life inside our house and became very interested in knowing what was going on in the house. One day I left the door to the living room open and she wondered in. I immediately shut the door and that the rest is history. The two cats have been living with us ever since.

Tiger and Angel have been with us since the summer of 2004 and moved with me to North Carolina in 2005. My wife joined us in 2008. They are like family. We feed them the best there is and have them checked up annually by the vet. They both get along fine and are both loved by my wife and I very much. They are both in good shape except that Tiger has a liver condition that requires him to be on anti-biotic. These cats have been involved in several house moves with us but always adapted to their new home in a very short time. We never let them out of the house for safety reasons. We would be lost without them and would never think that a stray cat like Angel could ever adapt to living with people the way Angel has. 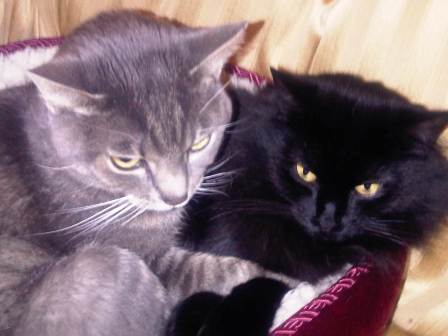 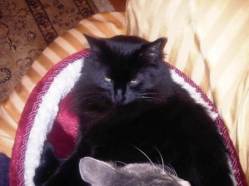 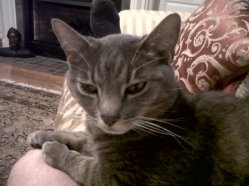 5 thoughts on “Bijan Foroutan…Tiger and Angel…”